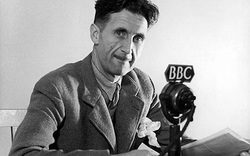 Beastly. This was the first word of Eric Authur Blair, or as we know him, George Orwell. Born on June 25, 1903 in Motihari, Bengal, India, he was the son of British civil servant, which required them to move to India. His mother then moved him and his older sister to Henley-on-Thames, England in 1904.

As a child, George was prone to illnesses such as influenza and bronchitis and spent his first few years in and out of the doctor's. Once back to health, he was sent off to St. Cyprian's Boarding School on a partial scholarship. He was a star student, but noticed the richer kids were treated better than the poorer ones, so he was never truly recognized. George, however, turned to books for comfort and read authors such as Rudyard Kipling and H.G. Wells. His studying paid off and was offered scholarships to several universities.

Despite the financial aid, his family still could not afford it and in 1922, Orwell joined the India Imperial Police Force. He resigned after five years to jump start his writing career. When he was younger, George enjoyed writing poetry and at age eleven had a poem published in the newspaper. He now turned to writing about his travels and published his first major work in 1933, Down and Out in Paris and London. Three years later, Orwell married Eileen O' Shaughnessy.

In 1937, Orwell and his wife traveled to Spain where he fought in the Spanish Civil War. He suffered from major injuries, including a shot to the throat and arm. He returned back to England in 1938 and the same year was diagnosed with tuberculosis. Orwell retired from the war front and dedicated all of his time to his writing. He began collections of essays and reviews and soon became known for them. In 1941, he landed a job as a producer with BBC radio. At the same time, World War II was kicking off and Orwell's job required him to act as a propagandist for the war, which he loathed. He quit and became a literary editor for a socialist newspaper.

1945 was an eventful year for Orwell. He published his first major novel, Animal Farm, which alluded to the Soviet government where the lead antagonist, a pig named Napoleon, portrays Josef Stalin. The novel brought him great fame and fortune and also caused many to consider their views on the war. The same year, Orwell's wife died. The couple had adopted a son the previous year and knowing he could no longer support both himself and his child, he gave it to his younger sister to raise.

It was another four years later, in 1949, when he had his next literary accomplishment. His novel, Nineteen Eighty-Four, gave readers a look into a future where the government controls every aspect of a person's life-down to their personal thoughts. The book brought controversy, with his audience saying the book was "too despairing." Orwell did not have time to enjoy the book's success as he was in the late stages of his tuberculosis. On January 21, 1950, George Orwell died in a London hospital at the age of 46 years old.

Although he died far too early, George Orwell's opinions still rage on today in his books, essays, poems, reviews, and in the minds of those who partake in his literary boldness.